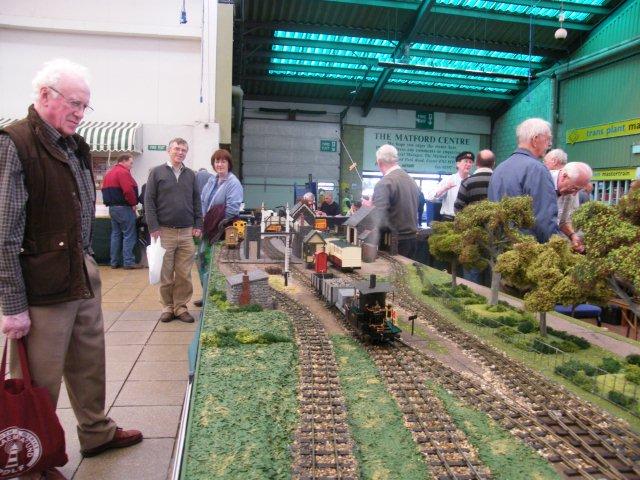 Click here to see the video of Mendip Vale at Exeter

We will be steaming on the layout at the following events;

"The biggest garden railway show in the world"

Organised by The Association of 16mm Narrow Gauge Modellers

At the Exeter Show: 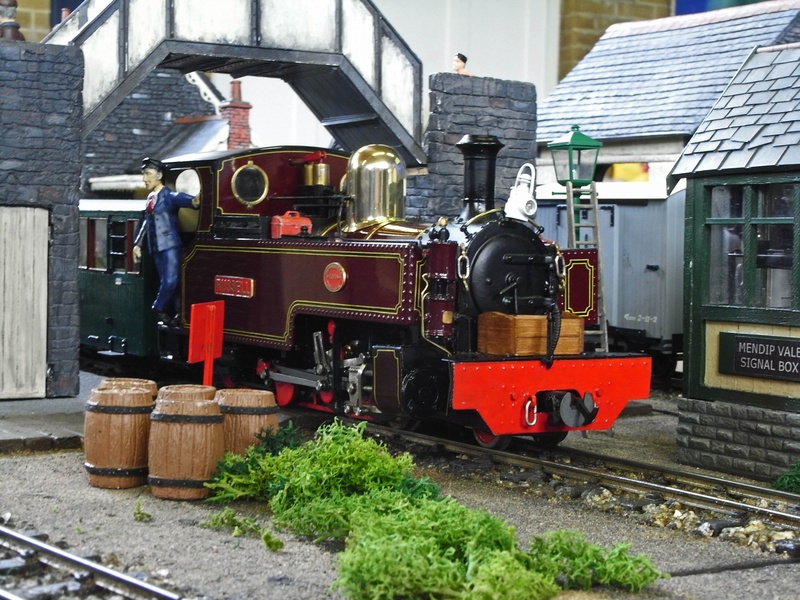 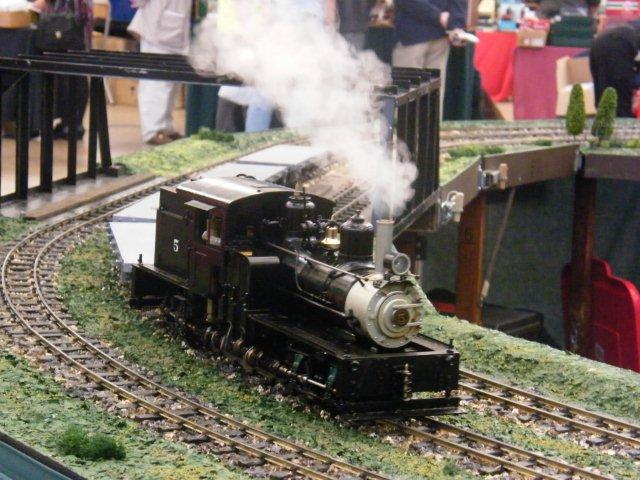 USA reigns supreme! A Shay with a fine head of steam

Several locos being prepared to run at the Exeter Show 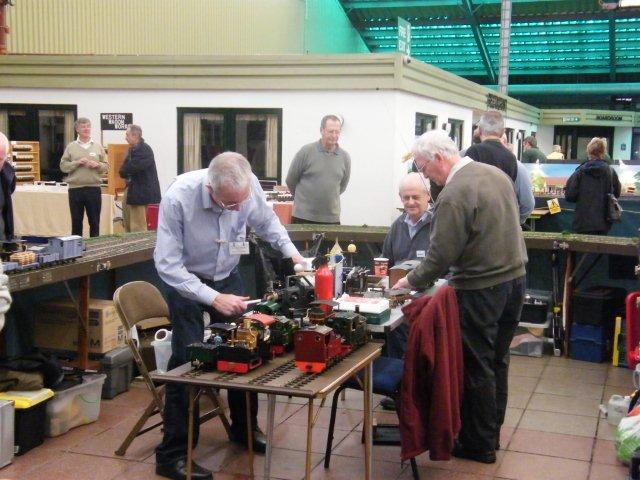 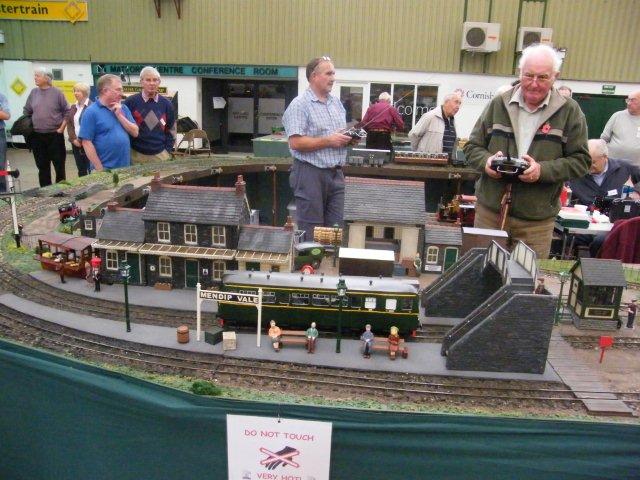 A look of concentration..,......Diesels are allowed - occasionally!

More of Mendip Vale may be seen at www.youtube.com put 'severnmendip' into the 'youtube' search-box

How Mendip Vale was built

"Ed and Dick may want their layouts back." This was the gist of a conversation shortly after the Exeter show in 2003.

Ed Short and Dick Dorton had very kindly allowed the use of parts of their personal 16mm layouts known as "Weyford" to be used by the Severn Mendip group as the group layout, and the idea was raised in the December newsletter of a new layout.

Two newish members offered their woodworking workshops for the project if it got off the ground and were duly elected onto the sub-committee, the first meeting being in March 2004. The members drew up the parameters for the baseboards.

Several members thought that 6mm ply would be adequate, others that it should be 9mm. Thoughts on board sizes were first that 3 x 2 would be the right size as the track comes in 3ft lengths. It was pointed out that track has to be cut at turnouts and around bends so this was a non- starter. One of the woodworking fraternity had done some speculative drawings and suggested that 4 x 2 would be a more economical size, as a standard ply sheet is 8 x 4. The question of minimum radius was also raised and it was settled at about 4ft 6in.  Bob & Brian were then charged with the task of making up "prototype" boards to prove the various theories put forward.

Various drawing suggested that square corners were not an option if we wanted to keep to the desired min. rad., but that a 12 sided circle was and the geometry suggested that the 12 corner boards could be cut from 2 of 8 x 4 or 4 of 8 x 2 sheets with the only waste being the fillets at each end.

A sheet of 6mm ply was the starting point and from this we were able to make up one 4 x 2 and 1 corner board. Brass dowels and over centre clips were obtained. A drilling jig was made up to locate the dowels so that the modular concept could be achieved, but then it was realised that 6mm was not thick enough for the end pieces so this was increased to 12mm.

Then came the problem of legs. With a ply frame there is a distinct lack of rigidity and the usual way to overcome this is to use diagonals, but this restricts the space to store folding legs. The first idea was to use the type of cupboard hinges as used almost universally for kitchen cabinets, but they need to work as pairs so that was abandoned.

Eventually, from using 3 x 1 softwood as corner strengtheners we progressed to 4 x 2 profiled blocks, which acted as accurate corner blocks, supports for the ends of the 4? long diagonals and sockets for the legs. Similar blocks were made for use in the angled boards with the legs cut in half and held with over centre catches. All this means is that we have no loose nuts, bolts, legs or joiners to lose.

So we had a set of 17 boards and a lifting bridge on which to lay our track 2in wide and to an overall size of 22in x 14in. The centreboard at each side has 4 legs, all the rest piggyback and has 2.

It soon became apparent that we did not have enough width for a station and goods yards so more 4ft x 2ft ply was cut and, again, self contained to hang from the front boards. This did not increase the overall size of the layout.

By now the idea of a completely modular layout had been abandoned but by careful laying out of the end curves we are able, if necessary, to just have a circle together with the bridge and a 2ft straight board.

There is the basic layout. Track was laid and presented to the group at the annual meeting in January 2005 and was well received by the members.

Our first outing to an exhibition was to the "Small and Delightful" at Shepton Mallet in February 2005 and was erected and a loco running in twenty minutes. The scenery and buildings were borrowed from members for this first outing but the group has gradually bought suitable buildings and trees etc.

Did we achieve all our parameters? Not quite. The modular idea was not feasible when we started to lay track but most other ideas worked and we now have a layout that can be up and running in less than half an hour but with the scenics taking a little longer. Locos and rolling stock is all supplied by members. We have two independent tracks and can run, with care, at least two trains on each track.

The layout has had the privilege of visiting the Shepton Mallet show, Exeter show, the AGM at Stoneleigh, the North and South at Stroud and various gardens for members with no permanent garden layouts. We are able also to use it in a church hall for winter running sessions and these are very well attended.

The layout is complete but not necessarily finished. Work is always ongoing to improve our enjoyment.Since the details above were written there have been improvements and additions. The first bring an extra 2ft board across each end giving more room inside the layout.

A small improvement to the track layout at the station gave us room to add the footbridge which was built and modelled by two of our members. This also gave more curves to the track through the station.

When first built the layout we thought it would be placed against a wall at an exhibition so we did not plan any scenery on the boards just four straight tracks. This was soon modified with a crossover and track ballasted. There has generally been access all round at exhibitions so the improvements are justified.

We have in our membership many brilliant modellers who have improved the look of the layout with details such as the grounded coach body converted to a snack bar complete with bacon baps, pasties etc. You may also see a supermarket trolley dumped in the brook. If you look carefully there is a working clock in the signal cabin. Complete but never finished.

The latest major improvement to the layout was to widen the rear edge of the layout by the addition of four 4ft x 1 ft boards on ther inside giving room for additional scenery. These boards hang from the larger ones. There is a model beam engine house which fits nicely on the widened boards. The operation of the beam gives some movement even in the absence of trains. The additional space allowed moving of the trackwork, addition of rock faces, a further cross over and a siding. Thisa gives more flexibility in running and making up trains.

View of the inside edge of the baseboards and fasteners.